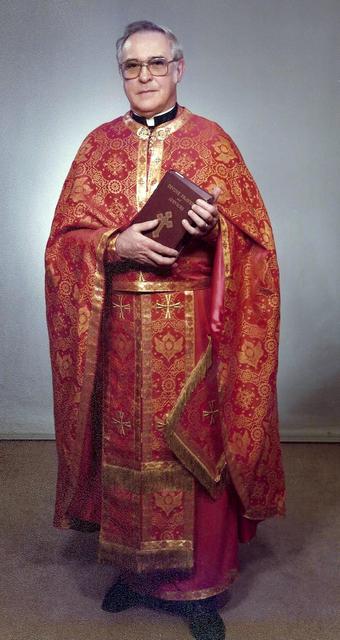 Archpriest John Kahle was born July 19, 1928, in Emmaus, Pennsylvania, to James and Rachel (Ludwig) Kahle. He attended the elementary and high schools in his home town, and graduated Class Orator in 1946. After serving four years with the United States Army, he began a 14 year career with Air Products and Chemicals, Inc., serving as Supervisor of Plant Safety, Plant Planning Manager, and Manufacturing and Engineering Estimator. In 1964, he left Air Products and opened Kahle’s Music Store in Emmaus, which he owned and operated with his family until 1995 when he retired from business.

A convert to the Orthodox Church from the Lutheran faith in 1951 when he married the former Helen Sikorski, Fr. John was ordained as subdeacon on December 24, 1979, by His Eminence, Archbishop ELIA and to the holy diaconate by His Eminence, Metropolitan PHILIP on September 28, 1980, at the Church of St. Ignatius of Antioch in Bolivar, Pennsylvania.

On April 28, 1982, he was ordained to the holy priesthood by Metropolitan PHILIP at St. George Antiochian Orthodox Church in Allentown, Pennsylvania, and served there as Assistant Pastor until 1987. In January of that year, Fr. John was appointed pastor of the newly founded Mission Church of St. Paul in Emmaus, Pennsylvania. Under his leadership, the parish grew from 45 members to 150 members and moved from the tiny church on S. 4th Street to its present location, a much larger edifice, at 156 E. Main Street in Emmaus. On September 28, 1997, on the day that the new church was dedicated, Fr. John was elevated to the dignity of archpriest by His Grace, Bishop ANTOUN. He continued to serve the faithful of St. Paul as their pastor until his retirement in May of 1999.