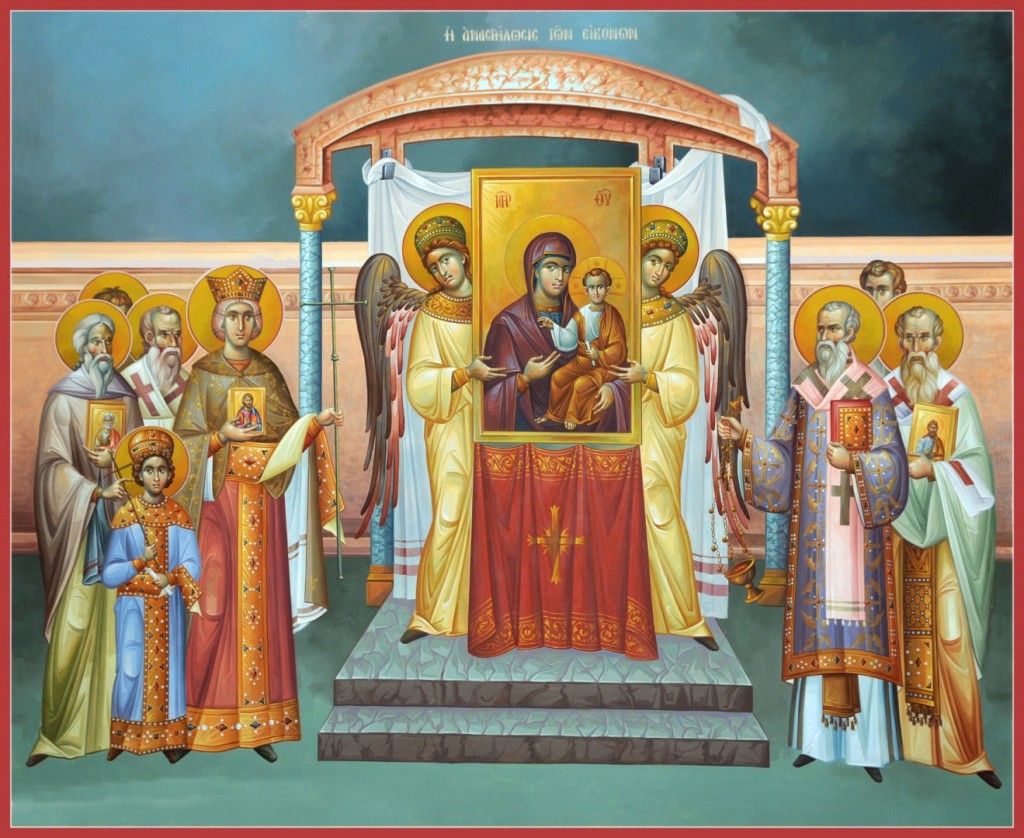 It is well-known among Orthodox Christians that the word orthodoxy—often used as a shorthand for our faith—has two parallel meanings. It is composed of two Greek words—orthos and doxa. Together, they form orthodoxia, rendered into English as orthodoxy.

The word orthos literally means “straight,” and those familiar with geometry will recognize it in the word orthogonal, which refers to something lying at a right angle. Those who know something about dentistry will think of orthodontics, which concerns itself with straight teeth, while the orthopedist wants to make sure your skeleton is straight (literally, orthopedics means “straight children”). It should come as no surprise that Greek uses orthos metaphorically also to refer to something that is true, since we English speakers use straight to refer to reliability and truth, especially in such terms as straight-talker or to be set straight. And of course someone who is on the right path is on the straight and narrow. And no doubt our minds are also called to the use of the word straight to refer to a properly ordered sexuality or even from a decade or two ago when straight referred to someone doesn’t take recreational drugs.

The other side of the word orthodoxy is what may intrigue us more, however, and it is the doxa which gives orthodoxia its double meaning, for doxa can mean both “opinion” and “glory.” Often, in thinking of orthodoxy, it is this first meaning that occurs to the world—an “orthodoxy” is a hard and fast, unmovable set of teachings or opinions. And this meaning should occur to us, as well, that Orthodoxy is very much about the straight, true teachings of the Church, teachings that cannot be changed. The orthodoxy of the Orthodox Church is therefore precisely a deposit of faith, a theology that will never be altered, because it is the truth. It is the straight teaching, the true opinion.

There is more to this side of doxa than “opinion” or “teaching,” however. Doxa was used in the ancient world for many things. Indeed, its primary and most basic sense can be translated as “notion,” especially with the question of whether that notion is true or false. From that, doxa can also be an “expectation,” which makes particular sense if the truth value of a notion remains undefined. Thus, we may also know orthodoxy as a “true notion” and as a “true expectation.” Doxa can also mean “a judgment” or “conjecture,” which takes us into a more psychological realm. If you have a doxa about something, then of course that may be your idea or your opinion, your judgment about the character of the subject at hand.

But the inner sense of doxa is even more expansive than these almost purely philosophical definitions. There are also ancient uses of doxa that we may translate as “imagining,” “a dream,” “a fancy,” or “a vision.” It may be almost whimsical to think in these terms, but if you’ll permit me a little mystical whimsy, consider for a moment that the Orthodox faith is also the “true imagining,” the “true dream,” or the “true fancy.” I do not think that it will surprise you at all to learn that Orthodoxy is also the “true vision.” We are accustomed to think of imagination, dreams, fancies and visions as unreliable, flimsy things, and that is perhaps why we need that orthos for our doxa, to make it clear that this one doxa is the true one, the reliable one, the straight one.

So with that in mind, let us dream together a little more about this word orthodoxy. The other side of doxa with which we are perhaps familiar is that it means “glory.” This sense of doxa is derived from its meaning as “opinion,” and so doxa can be used to refer to the opinion that people have about something, its reputation, how it is esteemed. And so it is not a large leap from “reputation” to “glory,” for something with a good reputation is sure to be glorified. But glory does not only mean giving praise to something, and it is not limited in this way for doxa, either. The meaning extends on toward “effulgence” and even “splendor.” Thus, the Orthodox faith is also the “true reputation,” the “true splendor.” And we may say that it therefore implies “true worship,” because that glorification is directed toward the God of the universe, and it is His true splendor that shines through in Orthodox worship.

What a wonderful word orthodoxy is! On reflection, we must certainly agree that all of these varied senses of what the word might mean are all applicable to the Orthodox faith. Orthodoxy is certainly about what is straight and true, and the “what” there is not just a notion or opinion or teaching, but it is imagination, dream, vision, and (of course) glory and worship. No wonder that we say it is a whole life! It’s not just about believing the correct things.