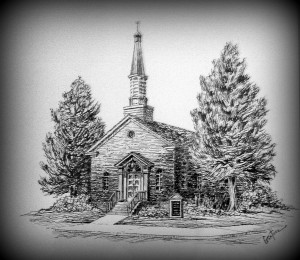 Saint Paul Antiochian Orthodox Christian Church began its formation in 1984 as a mission in Emmaus, Pennsylvania, dedicated to providing a “pan-Orthodox” parish of the Antiochian Archdiocese, preaching the gospel in English while respecting and embracing a variety of cultures. The mission was led by the V. Rev. Fr. John Kahle of blessed memory, beginning with forty-five founding members.

In January of 1987, by the blessing of His Eminence, Metropolitan PHILIP, St. Paul’s was officially granted the status of a mission of the Archdiocese, with the parish constitution blessed in 1989. Services were held in a small church building on S. 4th Street in downtown Emmaus, just south of the Emmaus Triangle, and in January of 1992 the parish celebrated its fifth anniversary, with events presided over by His Grace, Bishop ANTOUN.

In time, it became clear that the small building housing the mission was no longer sufficient to the parish’s needs, so in July of 1992 a search began for new property. In 1996, purchase of the property at 156 E. Main Street was completed, with renovations beginning immediately. In March of 1997, shortly before Pascha (Easter), the new building officially opened. Services have been held there since that time. On September 28, 1997, with the dedication of the new property, Fr. John was elevated to the rank of archpriest, and Theodore J. Mikovich was ordained to the holy diaconate.

With the formation of the Diocese of Charleston, Oakland and the Mid-Atlantic in December of 2004, the episcopal leadership of the parish was taken up by His Grace, Bishop THOMAS.

On October 15, 2005, St. Paul’s was officially consecrated by Bishop THOMAS, and into the holy altar were placed the relics of the Apostle Paul, St. Joseph the Betrothed, St. Anna (the mother of the Virgin Mary), St. Cassian of Imola and St. Theodore the General. By December of 2007, the mortgage on the parish property was paid off, and a mortgage burning celebration was held. On April 6, 2008, Fr. John reposed in peace and departed this life.

In July of 2009, Fr. Theodore retired from active ministry, being elevated to the rank of archpriest that same year, and was succeeded by the Rev. Fr. Andrew Stephen Damick.

During Fr. Andrew’s administration, in addition to both numerical and financial growth in the parish, the parish’s ministries were expanded and enhanced in a number of ways: the introduction of regular weekday worship services, holding regular adult education classes, broadening of outreach and charitable engagement with the Emmaus community and beyond, energetic use of the Internet and social media for communication, increase in education and use of the art of Byzantine chant in worship, the institution of by-laws and a full budget for the parish council, greater participation in Archdiocesan and pan-Orthodox activities, the initiation of a highly successful stewardship program, and considerable expansion and organization of the parish library.

In 2012, St. Paul’s celebrated its twenty-fifth anniversary since its founding by the Archdiocese in 1987, with festivities presided over by His Grace, Bishop THOMAS. 2013 saw the hosting of the Eastern Dioceses Parish Life Conference by the parish, bringing together some fifty churches in one place to pray, learn and work together. 2014-2015 saw the renewal and reorganization of three major ministries of the parish—the choir and chanters, the Sunday School and the Antiochian Women.

In May of 2016, St. Paul’s mourned the loss of its pastor emeritus, the Archpriest Theodore Mikovich. In October of that same year, Fr. Andrew was elevated to the rank of archpriest by Bishop THOMAS.

In 2017, two major projects were introduced to the parish: 1) a program of beautification to increase the visibility and beauty of the front facade of the building (dedicated at 30th anniversary celebrations) and 2) a two-part, six-week discussion-based class designed to give inquirers, catechumens and existing members an overview of the Orthodox Christian faith, held on Saturdays in Lent and Advent.

In September 2018, the Axion Estin of Emmaus icon, painted by Protodeacon Paul Drozdowski, was installed in a shrine and dedicated, with the icon’s June 11 feast established as an annual pilgrimage feast for the whole Lehigh Valley.

In 2019, St. Paul’s celebrated the first ordination of a son of the parish, with the ordination to the holy diaconate and priesthood of Fr. George Goodge, a 2017 graduate of St. Tikhon’s Seminary, by Bishop THOMAS. Fr. George was subsequently assigned as pastor of St. George Church in New Hartford, New York.

In August 2020, Fr. Andrew accepted the position of Chief Content Officer of Ancient Faith Ministries and was succeeded by our fourth pastor, the Rev. Fr. Joseph Landino.

St. Paul’s community continues to grow in three ways: 1) The embrace by Christians and non-Christians of the Orthodox faith, 2) The baptism of the children of younger families and 3) The return of Orthodox Christians to active life in the Church after a period of inactivity.

The parish is ready to welcome all who love the Lord Jesus Christ and seek to know Him better, providing a haven for souls and a place of growth in spiritual life.