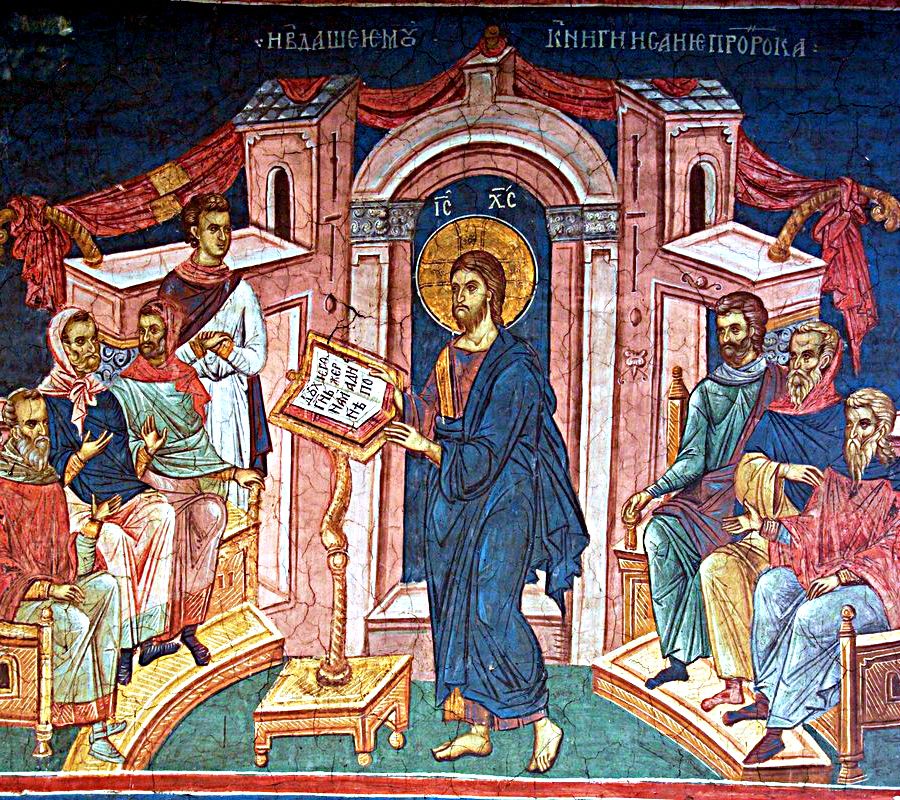 In the Name of the Father and of the Son and of the Holy Spirit, one God. Amen.

Today we celebrate a feast that is called the Indiction, the New Year’s Day for the Orthodox Church. No doubt most of us, hearing that today is the Church’s new year, may just file this away in the back of our heads as yet another bit of incomprehensible weirdness in Orthodoxy. Of course it’s not the real New Year’s Day. That’s on January 1st, right?

Things are never so simple. After all, don’t the names of the last few months of the year—September, October, November and December—respectively come from the Latin words for seven, eight, nine and ten? Yet those are not the seventh through tenth months of the year, but rather the ninth through twelfth. So the first month must have been March at some point. And yet the new year wasn’t necessarily March 1st but in many cases in Christian history it was on March 25, the feast of the Annunciation. (And, incidentally, it is also the day on which J.R.R. Tolkien’s evil One Ring of Power is destroyed and marking a new year and even a new age in his The Lord of the Rings. Coincidence?)

And even between the eastern and western parts of Christendom, the ecclesiastical new year is not on the same day. The western liturgical traditions begin their new year at the beginning of Advent, which is always the Sunday closest to St. Andrew’s Day on November 30. So their years are actually not all the same length, even aside from the issue of leap years every four years. And in the Middle Ages, some places used December 25th as their New Year Day.

So where did we get September 1st to mark a new year, anyway? Why is the Indiction our New Year’s Day? The word indiction means “a proclamation,” and its origins are in the Roman Empire, which dated its official proclamations from September 1st, effectively setting this as New Year’s Day for the Empire, particularly for tax purposes—a sort of fiscal year. In its original usage, indiction referred to a fifteen-year cycle. The Church, as it gradually baptized the Empire, appropriated the Indiction for itself and incorporated it into its own calendar, although reducing its meaning essentially to just the New Year’s Day itself.

This little tour through calendrical obscurity actually underlines a pretty important theme in the way that Orthodox Christians understand and live the spiritual life, and that theme is time.

Prior to the introduction of Christianity to the world stage, most of humanity saw time and history as essentially cyclic, just going around in repeating circles, which made some sense. Days move in cycles, as well as seasons, years, etc. History was not something that was particularly going anywhere. But when faith in Christ began to spread, the world began to see time differently. The Church had inherited from the Jews a view of time that saw history as having a definite direction, including a beginning and an end.

And with the idea that time has an end came the idea that that end is not just when it will all be over, but that there is a purpose to history, and that is of course another meaning for the word end. And if something has a purpose, an end, then it also has meaning.

The Church took up this conception of time with vigor, and it not only maintained the Jewish traditions of filling up the hours and days and seasons with feast days, but it also developed dogma and theology of the final days of existence, what is called eschatology. All things are moving toward a definite end point. History is not just one day after another, but it is steadily progressing toward a goal, toward a series of events that will mark not just the end of an era, but the end of time itself.

When that end comes, Jesus Christ will return to the Earth, all of the dead will be raised, everyone will be judged by Christ according to what they have done, and we will transition into an existence that is beyond the kind of time that we now experience. The question for each of us is how we will then spend that eternity. Will we progress in deeper communion and holiness, ever exploring more intimately the infinite ocean of God with all the saints, or will we spend it in eternal suffering?

When considering any purpose or endpoint, the biggest question is always how we will get there. What is the path to the end of time? We will all certainly get there no matter what we do, but how we will arrive is what is at stake. The path to eternal suffering is the easy one, and here’s how you get there—do what makes the most sense to you, what pleases you, what makes you feel good, what accomplishes your own temporal goals here on Earth. Focus on what you want. Don’t worry about what God wants. You might be a “success” in this earthly life, but at the end, that life of self-centeredness can lead to only one place for eternity.

We are Christians, though, so we reject that way of living. We who have been baptized into Christ have been initiated into another kind of life. We press toward a different mark. We don’t want eternal suffering. We want eternal life. So how do we get there? We learn this from today’s Gospel reading.

Today, we hear Jesus Himself reading this passage in the synagogue: “The Spirit of the Lord is upon Me, because He has anointed Me to preach good news to the poor and to heal the broken hearted. He has sent Me to proclaim release to the captives and recovering of sight to the blind, to set at liberty those who are oppressed, to proclaim the acceptable year of the Lord.” And then He says, “Today this Scripture has been fulfilled in your hearing.”

When Jesus reads this passage from Isaiah’s prophecy, He tells His listeners that it’s now been fulfilled. This is history working the way it should. In the fullness of time, God sent His Son for that purpose—to preach good news to the poor, to heal the broken hearted, to proclaim release to captives, sight for the blind, liberty for the oppressed. And notice how the prophet describes this: “To proclaim the acceptable year of the Lord.” He puts it precisely in terms of time, of history.

This is history’s true purpose, the one that God has set in motion, that He sent His Son to do all of those things, to bring to us the way of salvation. And this is why time matters, why it matters that we have times and seasons for prayer and for feasts and fasts, so that we may redeem the time and participate in “the acceptable year of the Lord.”

And we each have been given this moment to orient toward the end of time in one way or another. Will I, at this moment, choose the way of life or the way of death? This moment has meaning because time has meaning. This moment has purpose because time has purpose. And while the great narrative of history ends with the reestablishment of the eternal rule and power and presence of God—the Kingdom of God—throughout the whole creation, the question for me is how I will arrive at that end. Will I be a citizen of that Kingdom or on the outside?

Our culture provides so many ways to be distracted, so many ways to put these things off. It is far easier to choose entertainment than prayer, to choose some “function” over churchly love, to choose possession over generosity. And while it is not inherently wrong to participate in those earthly things, why do we seem to choose the earthly and temporary over the heavenly and eternal almost every time? Today begins the acceptable year of the Lord. Today is the day of salvation. Let us begin again today.

To our Lord Jesus Christ therefore be all glory, honor and worship, with His Father and Holy Spirit, now and ever, and unto ages of ages. Amen.