You are here: Home / Archives for iconography 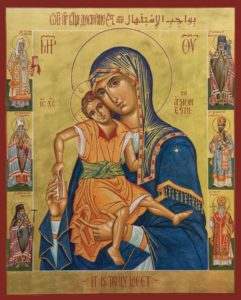 Creating an Icon for Emmaus, PA, and other peculiarities of contemporary iconography

On Sunday, February 17, at 10:30am, Orthodox Christian iconographer Protodeacon Paul Drozdowski will be discussing the creation of the “Axion Estin of Emmaus” icon and will briefly touch on relevant issues which iconographers in previous centuries never encountered.

The talk will be preceded by the Orthodox Divine Liturgy, served at 9am.

A lifelong artist, Pdn. Paul formally studied drawing, painting, printmaking, and design at Tyler School of Art, Temple University, earning a Bachelor’s degree of Fine Arts. Subsequently, he spent a year and a half studying at Holy Trinity Theological Seminary in Jordanville, NY. During that time, he simultaneously worked under the tutelage of master iconographer Fr. Andrei Erastov, and began fulfilling monastery orders almost immediately. Thus he was able to synthesize his artistic studies. Since then, Pdn. Paul has fulfilled many commissions for both churches and individuals, and his work can be seen coast to coast. He is also the illustrator of the children’s book St. Seraphim’s Beatitudes, authored by Fr. Daniel Marshall. Pdn. Paul enjoys classical music, world and local history, and nature walks with his family. Fr. Paul is currently an ordained clergyman, in the rank of protodeacon, and serves at the Russian Orthodox Cathedral of St. Alexander Nevsky in Howell, NJ.

MORE ABOUT THE ICON:

This icon, enshrined at St. Paul Antiochian Orthodox Church of Emmaus, Pennsylvania, is modeled on the original Axion Estin (“It Is Truly Meet”) icon of Mount Athos (feast day, June 11).

It was in AD 982 before the Athonite icon that the expanded version of the hymn “More honorable than the cherubim…” was first sung by the Archangel Gabriel, who added the prelude “It is truly meet to call thee blessed, O Theotokos, ever-blessed and all-blameless and the Mother of our God,” and inscribed the hymn miraculously with his finger on a slate tile. The hymn has been sung ever since in the Divine Liturgy of the Orthodox Church.

The original Axion Estin icon is kept in the apse of the Protaton Church in Karyes on Mount Athos. The Axion Estin of Emmaus was painted by iconographer Protodeacon Paul Drozdowski in 2018. It features the main inscription in four languages: Greek (next to the head of the Virgin), Church Slavonic and Arabic (at top), and English (at bottom).

The six saints who surround the Theotokos and the Lord Jesus are the Holy Hierarchs of America: (top) Tikhon of Moscow and Raphael of Brooklyn, (middle) Innocent of Moscow and Mardarije of Libertyville, (bottom) John of San Francisco and Nikolaj of Žiča. All served in America, and several of them spent time in Pennsylvania.